No.4 This site.
8． Kachi-Kachi-Yama(a mountain’s name)
9.   Inaba no Shiro Usagi (The Hare of Inaba)
10. Omusubi Kororin (The Rolling Rice Ball)

Notes; Yama means mountain and kachi-kachi is the crackling sound a fire makes.

The next day, the rabbit tricked the raccoon dog into going fishing.

9. Inaba no shiro usagi (the rabbit of Inaba) 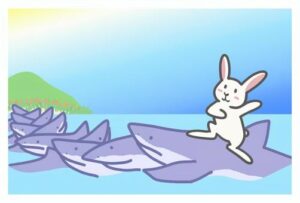 Once upon a time, a rabbit lived on an island.

One day, the rabbit wanted to go to the headland on the other side of the island, but she could not swim.

The rabbit came up with an idea and did it.

She said to the shark swimming in the sea,
“Mr. Shark, I think your family and mine have a lot in common. Who do you think has more family, yours or mine?”
“Of course I do.” said the shark.
“Well, let’s count them. Gather your family here and line up in a single file from this island to that cape. I’ll run up there and count for you. Then we’ll see who has more. said the rabbit.

A few days later, when all the sharks were lined up on the sea, the rabbit jumped over the sharks’ backs, pretending to count.
And when reached the cape, she said to the sharks.
“You fool shark, you don’t even know you’ve been tricked. I just wanted to come here. Silly shark.”

When the shark realized he had been tricked, he caught the rabbit and skinned her.
“It hurts!”
The rabbit cried out in pain and didn’t know what to do.
The shark told her to go into the sea and she would get better.

The rabbit did as he was told and went into the sea, but the sea water was salty water and it hurt her like hell.

The shark said,
“You stupid rabbit, you don’t even know you’ve been tricked.”
The shark said.
The rabbit was crying, not knowing what to do.

At that time, a young god passed by and said to the rabbit.
“Wash yourself in the river water and sprinkle some cattail pollen on your body. Then you will be well.(*)”

The rabbit did as she was told and became a white rabbit again. 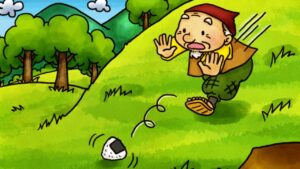 Notes: Yokkoisho is a call to action.

“Grandpa, thank you for the tasty Omusubi!”
said the rats.
I’m glad you enjoyed them.

And Grandpa dropped the Omusubi into the hole every day.
“I’m so glad you like them.” said the old man.
“Rolling Omusubi, We are so happy.”
Grandpa heard the happy voices of the rats every day.

One day, the mice came out of their holes and said to him,
“Grandpa, thank you for always bringing us delicious Omusubi. In return, we give you this box.
The old man said,
“Thank you, Mr. Rat. Thank you.”
He took the box home.
When he opened the box at home, he found a lot of money inside.
The grandfather and grandmother lived happily ever after.