Once upon a time, a grandfather and a grandmother lived together in a rural area near mountains.

They were childless and prayed daily to God for a child. 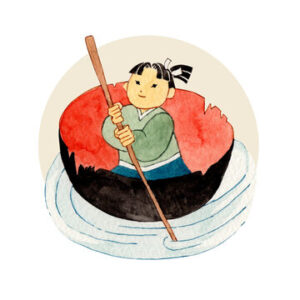 “God, please give us a child, even a small child. Any little child will do.
One day, to their surprise, a small baby was born to them. It was a little boy, less than an inch tall.
They immediately named him Issunboshi and raised him like a treasure.
(”Issun” is the Japanese unit of length and is approximately 1 inch. “boshi” means a word that expresses the meaning of “person” when added to a certain word. )
He became a strong and intelligent child, and one day, he said to them,
“Father and mother, please give me a needle, a straw, a bowl, and a chopstick.”
“What are you going to do with them?”
“The needle is a sword, the straw is a sheath, the bowl is a boat, and a chopstick is a paddle. I am going to the capital to become a samurai.”
Grandpa and grandma gave their permission to him.
Immediately, Issunboshi set out for the capital.
He met an ant on the way to the capital,
“Where is the river, Mr. Ant?
“At the dandelion field.”
Once he reached the river, he jumped into a bowl and started down the river like an arrow. On the way down, a fish came at him, mistaking him for food. The Issunboshi used his chopstick to chase the fish away.
After being buffeted by the waves, drenched by the rain, and blown by the wind, he finally arrived at the capital.
Walking proudly through the town, he saw a large, magnificent house.

He decided to work there and asked the gardman,
“Please open the gate. I have a favor to ask.”
The gardman opened the gate and looked around, but no one was there.
“I don’t see anyone.”
“I am at your feet.”
The gardman found the Issunboshi by his clogs.
He said,
“I am the Issunboshi. I would like to work here. Let me see the master of the resiodence”
The master came out and said,
“You seem to be quite active and intelligent. I will make you my retainer.”
In the residence where he was to work, there was a beautiful daughter. She taught him how to read and write, and the Issunboshi was so smart that he understood immediately.
One day, the daughter took the Issunboshi to visit the shrine, and on the way, they met a big ogre. The ogre had come to kidnap the daughter.
“If you touch my daughter even a little bit, I’ll give you a good deal more than you deserve.” said the Issunboshi.
“You are so cheeky. I’ll eat you up.”
And with that, the ogre swallowed the Issunboshi in one gulp.
“Ow, ow, ow, ow…”
The Issunboshi stabbed in the stomach with a needle.
“Ouch, ouch, ouch! I’m going to die. I give up. Help me.”
The demon spit him out and ran away toward the mountain.
“Thank you for saving me,”
she said.
“You are small, but you are very brave and strong,” said the daughter.
“Look, please. The ogre forgot something.”
“What is this?” said the Issunboshi.
“This is a happy gavel, the Uchide-no-Kozuchi.
“If you swing it, you can get anything you want. What do you want, Issun-boshi?”
“I want to be big.”
As soon as she swung the Uchide-no-Kozuchi, the Issunboshi grew rapidly and quickly became an adult.
He married a daughter and became a splendid warrior, just as he had wished.

Once upon a time, there lived a kind-hearted fisherman named Urashima Taro. 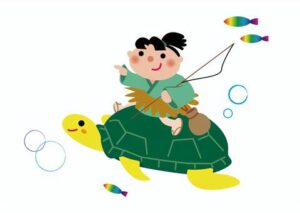 Urasima ia a family name and Taro is the first name common in Japan.
One day, while walking along the beach, he saw a turtle being bullied by children.
The fisherman said to the children,
“You should not bully the turtle. Let him go.”
With these words, Urashima Taro rescued the turtle from the children.
A few days later, while Urashima Taro was fishing, as usual, the turtle came out of the sea and said,
“Mr. Urashima Taro, I am the turtle you saved the other day. The princess told me to take you to the Dragon’s Palace.
I am here to take you to the Dragon’s Palace. Well then, let’s go there for a while.”
Urashima Taro immediately got on the turtle’s back and went into the sea.
Surrounded by corals and swimming fish, the Dragon’s Palace was a beautiful castle. The princess was a beautiful woman.
She said,
“Mr. Urashima Taro, thank you for saving the turtle. Please make yourself at home.”
Taro was taken to a large room in the castle and was treated to a sumptuous feast.
Fish such as sea bream, flatfish, and octopus danced for Taro.
Taro lost track of time and enjoyed himself.
Every day was like a dream.
After a few days, Urashima Taro remembered his village and his mother, and finally, it was time to say goodbye to the princess.
As they parted, the princess handed Urashima Taro a small box(Tamatebako).

Notes:Tamatebako is a word created by combining “tama,” meaning “beautiful,” and “tebako,” a traditional Japanese small box in which small tools are kept.

“I have been in the Dragon’s Palace for seven days now, and it is time for me to go home. Thank you very much.”
“I wish you could stay here forever, but there is nothing I can do. Please take this small box with you, but please do not open it.”
When Urashima Taro returns to his village on the turtle, he finds neither his home nor his mother, and his village has completely changed.
He was at a loss for what to do, so he decided to open the Tamatebako.
White smoke came out from the box and Urashima Taro suddenly became a gray-haired, wrinkle-faced, and hunchbacked old man in no time.

Hundreds of years had passed while he was enjoying his time in the Dragon’s Palace.
Urashima Taro is not sure where he is now or if he is dreaming.

Lessons from this story