No.3 This site.
5. Shitakiri-Suzume (The Tongue-cut Sparrow)
6. Hanasaka-Jii n (The Old Man who made flowers bloom)
7. Momo-Taro (The Peach Boy) 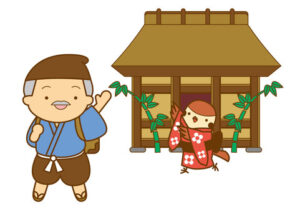 Once upon a time, there lived a kind old man and women. They were mean.
The grandfather loved sparrows as if they were his own children, but the grandmother hated them.
One day, while the grandmother was doing the laundry in the garden, a sparrow flew in and ate laundry glue(*) which the grandmother made from rice.

Notes: At that time in Japan, laundry glue is made from rice, not chemicals.

The grandmother was so angry that she caught the sparrow and cut off its tongue. The sparrow became sad and flew back to the mountain.
When the grandfather heard the story, he felt sorry for the sparrow and decided to find it and apologize to it.
He walked up and down the mountain saying repeatedly,
“Where is the lodging of the tongue-cut sparrow?”
“Where is the lodging of the tongue-cut sparrow?”
Finally, he found the sparrow’s lodge in a grove of bamboo.
“I’m so sorry, I hope you are all right. Please forgive my wife.”
He said,
“Thank you for coming all the way to these mountains. I was very shocked, but it was my fault. Since you are here, please have dinner with us.”
The Grandpa spent the night at the sparrow’s lodging.
The next morning, when Grandpa returned home, the sparrow said to him,
“Here are our souvenirs. There is a big box and a small box. Which do you prefer?”
The grandfather carried the small box on his back.
He went home with the souvenir on his back and opened it up to find a lot of money,  kimonos(Japanese clothes), and many other things.
His wife said to him,
“Why didn’t you bring the big one? I’ll go and get it.”
His wife replied again and again.
“Where is the lodging of the tongue-cut sparrow? Where is the lodging of the tongue-cut sparrow?”
and went into the bamboo grove.
The old woman met the sparrow.
“Why did you come here?” said the sparrow.
She said,
“I wanted to see you. I took good care of you.”
“Well, come in, then.”
“Now, get me a souvenir. A big box, of course.”
The old woman finally put the big box on her back and left the sparrow lodging.
On her way home, she was eager to see what was inside the box. She put the box down on the mountain trail, opened the lid, and looked inside.
To her surprise, snakes, ghosts, centipedes, and other horrifying things came out one after another.
The old woman was so shocked that she fainted.

6. Hanasaka-Jiisan (The Man who made flowers bloom)

Once upon a time, there lived a kindly old man. 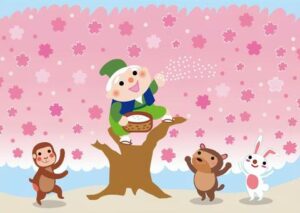 He had a dog named Pochi.
One day, when he and Pochi went out to the mountains, Pochi suddenly started barking.
“Koko hore(dig here in Japanese) wan wan(bowwow in English). Koko hore wan wan.
“What’s the matter? Let’s dig.”
“Oh, my God! A lot of gold coins have come out. Thank you, Pochi. You are a smart dog, aren’t you?”
When another old man next door heard this, he took Pochi secretly to the mountain and made Pochi bark.
“Here, here.”
Pochi barked quietly.
“Here it is. I’ll find a lot of gold coins and I’ll be rich.”
The old man dug up the place where Pochi had been barking and found many broken tiles and teacups.
The old man was so angry that he knocked Pochi to the ground.
The kind old man felt sorry for Pochi, so he made a grave for the dog in the garden
Then a strange thing happened.
A big tree grew out of Pochi’s grave, and it grew up in no time at all.
The kind grandfather cut down the tree and made usu(a rice mortar) from it.
When he made rice cakes with it, the rice cakes turned into a lot of gold.
Hearing this, the naughty old man secretly stole the usu and made rice cakes with it.
However, nothing happened, so the irascible old man got angry and burned the usu.
The kind old man was disappointed and took the ashes home.
He climbed up the withered cherry tree, and he said while scattering the ashes of the usu,
“I made a flower out of a withered tree. Let’s make a flower bloom on a dead tree.”
Then all the cherry blossoms appeared on the dead tree.
When the lord saw this, he was so pleased that he gave many rewards to the kind old man.
Hearing this, the mean old man climbed up the tree with the remaining ashes and said to the lord when he passed by,
“I am the master of making cherry trees bloom. Let’s make it bloom from now on.”
He sprinkled the ashes.
But nothing happened, and what was worse, the ashes got into the lord’s eyes.
The lord was so angry that he put the old man in jail.

Once upon a time, there lived an old man and an old woman.
The grandfather went to the mountains to collect dried-up sticks for fuel and the grandmother went to the river to wash their clothes.
While the grandmother was washing their clothes in the river, a large peach floated down.
“What a big peach! Let’s take it home.”
She carried it on her back and was about to cut it when a big baby came out of the peach.
“Oh, my God!”
The old man and woman were surprised but very happy.
“What shall we name him?”
“How about Momotaro, since he came from a peach?”
“That’s a good idea.”

Momotaro quickly grew up and became a fine, gentle boy.
One day, Momotaro said to them,
“I heard that bad ogres live on Onigashima Island.”
“They sometimes come to our village and does bad things, so everyone is in trouble.”
The old man replied,
“I will go there and exterminate them. Please make me some millet dumplings.”
Momotaro put the dumplings in his waist pouch and set off for Onigashima Island.
On the way, Momotaro met a dog.
“Momotaro-san, what do you have in your bag?”