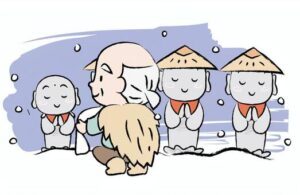 Once upon a time, an old man and an old woman lived deep in the mountains, far away from the village.
On New Year’s Eve, the old man went out in the snow to the village to sell hats he made made of straws for the farmers .
But he could not sell any of them.
The old man felt a blizzard was coming, so he decided to give up selling his products and went home.
On his way home in the snowstorm, he found six Jizos(stone statues). The Jizo statues were covered with pure white snow and looked very cold.

Notes: Jizo is known as the guardian deity of children in Japanese culture. Jizo is the most popular Buddha in Japan, which we can see on the roadside as well as in temples.

“What a sight! It must be cold with snow on your head. Please put this hat on you.”
The old man put the hat he was going to sell on the Jizo’s head.
However, he was short of one for the last Jizo. So he put his own tenugui (a thin hand towel) on it.
When the grandfather told this story to his wife, she was very happy and said,
“Grandpa, you did a good thing.”
They heard footsteps in the distance in the night. a thud, thud, thud.
Grandpa and Grandma looked outside.
They saw Jizos wearing a hat walking through the snow, and dragging heavy loads.
The last one of the Jizos was wearing an old man’s tenugui, a thin hand towel.
“Where is the kind old man’s house? We are grateful to him for putting a hat on us.
The sound became louder and louder, and when they reached the grandfather’s house, the Jizos put down their big baggage and went back into the snow.
When the Jogos disappeared, the grandfather and grandmother opened the door of their house. They found six bales of rice there.
Thus, they were able to have a happy New Year’s Day. 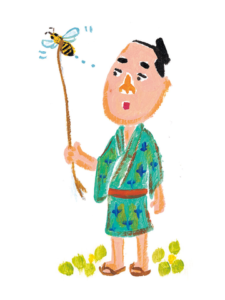 Once upon a time, an honest but unlucky man lived near mountains.  .
He worked and worked from morning to night, but he was poor and had nothing good to enjoy.
One day, he prayed to Kannon-Sama (Deity of Mercy) , as a last resort, at a temple without eating or drinking.
When it was dark in the evening after a few days, Kannon-Sama appeared before him and said,
“When you leave this temple, you will fall down and grab something. Take it and go west.”

Indeed, as the man was leaving the temple, he fell down and grabbed something.
It was a piece of warashibe (a straw).
The man thought the straw was of no use, but he took it and walked west.
As the man was walking, a flycatcher flew by, so he grabbed it, tied it to the end of the straw, and went on his way again.
After walking for a while, an oxcart came from the west. A child on the oxcart saw the horsefly that the man was carrying and said to his mother,
“Mom, I want that horsefly.”
The man gave the child a straw with a flycatcher on it, and the child’s mother gave him three tangerines in return.
Taking the three tangerines, the man walked further west.
After a while, he saw a daughter suffering on the side of the rural road.
She was so thirsty that she couldn’t take a single step.
“Is there any water anywhere?
So the man gave her a tangerine, and soon she felt better.
In return, the man received a beautiful silk cloth from her.
Taking the silk cloth, the man walked further west.
After a while, he met a samurai and his listless horse.
The samurai said,
“Oh, no. What should I do? I am in a hurry.”
Seeing the beautiful cloth, the samurai asked the man to exchange the horse for the silk cloth he was carrying.
The man gave the samurai the cloth and the samurai gave the man the horse in exchange.
The man took care of the horse through the night, and in the morning the horse was fine.
Taking the horse with him, the man walked further west, and there he found a samurai family that was going to move.
Then, a good samurai came out of the gate.
He said,
“Here, here, man. I must go to the East. Will you give me your horse? I am in need of a horse to carry my baggage. In exchange, I will give you this house and the fields behind it until I return.”
The man traded the horse for the house.
The owner of the house never returned at any time.
The man became a rich man with a magnificent house and a large field.
As Kannon had told him, the man became a millionaire with a piece of straw, and he never wasted a single piece of straw in his life.
The villagers called him “Warashibe-choja,” meaning “the millionaire of straw.”