This is a story from the Muromachi period (1336-1573). A boy was born in Kyoto, western Japan.
This energetic child was named Sengiku-maru. When he was six years old, he lived in a temple in Kyoto called Ankokuji Temple to practice Buddhism.
“From this day forward, you are no longer Sengiku-maru. You shall be known as Ikkyu.”
said the temple master.
“Yes, thank you.”
Ikkyu-san lived in the temple with the other children, Bokunen, Chinen, and Jyunen, to practice a life of hardship.
He woke up earlier than anyone else, did his housekeeping, and struck the bell first thing in the morning.
After that, he read sutras, sat in zazen meditation, went to the mountain in the afternoon to get dried wood for fuel, and did other hard work, day after day.
The meal was a bowl of porridge made of foxtail millet and pearl millet with a little accompanying dish.

One night, Ikkyu-san was so hungry that he could not sleep. He walked in front of Oshosan’s room to get a glass of water. Oshosan was Ikkyu-san’s boss.
He walked past Oshosan’s room and asked Oshosan,
“Hi, master, are you still awake?”
“I enjoy licking the fluid most of all. Oh, it’s so sweet and tasty!”
“Master, is it a starch syrup? It looks delicious.”
No, no, no, it is a medicine for an old man like me, but it is poison for children. Never eat it.”
“Yes, I understand.”

One day, when the Oshosan was out tending to his parishioners, Ikkyu-san and his colleague were cleaning the master’s room.
“Oh, my God! What shall I do? This is the master’s precious jar! ”
Chinen dropped, broke it, and cried.
“Chinen, it’s all right, don’t worry about it. Jyunen, take a crock under that cabinet.”
“What is this?”
He looked into the crock.
“It’s a starch syrup. Let’s lick it.”
“If you do that, the Oshosan will…”
“Just leave it to me, please.”
Everyone starts licking the starch syrup.
“Oh, it’s so good!
“Oh, yummy! It’s so good! It’s so good, it’s making my cheeks drop!”
“Delicious! Delicious! Poison syrup is so delicious!”

“What are you doing?” said the Oshosan when he came back.
“The truth is, we broke a jar that the Shogun(General) gave you. You hold it very dearly. We were so sorry that we ate the medicine that was in the crock, but the poison went out too fast and we still couldn’t die. Namu Amidabutsu, Namu Amidabutsu”
Ikkyu-san recited the scripture.
The Oshosan could not get angry.
“I’m beaten, I give up.”
Thanks to Ikkyu-san’s wit, Chinen-san avoided being scolded by the Oshosan, and everyone was able to enjoy the sweet starch syrup together.

A few days later, the Oshosan received a request from Matsuya Chobei, one of the village elders, to hold a Buddhist memorial service.
The letter also said that Oshosan should definitely bring Ikkyu-san with him.
There was a large bridge on the premises of Matsuya Chobei with a sign on it.
“Don’t cross this bridge.
(The word bridge has a double meaning in Japanese, a bridge and a sidewalk. )
“Ikkyu, we can’t go across the bridge.”
“No problem. Follow me.”
“Well, Didn’t you read the sign?”
“I read it. so, we can’t go on the sidewalk, let’s walk in the center of the bridge.”
“I see. you passed through the center of the bridge without going along the sidewalk. I see. Ha-ha-ha.”

Soon, the rumor of the smart Ikkyu-san became the talk of Kyoto, and the General of the time, Ashikaga Yoshimitsu, heard about it and invited Ikkyu-san to the Kinkakuji temple(Golden Temple) where he built it.
Ikkyu-san sat formally before the General and bowed deeply.
“Ikkyu, you, lift up your head.”
“Yes.”
“You have a reputation for being very intelligent, I have a favor to ask of you.”
“Yes sir, what is it?”
“Well, there’s a tiger painted on the thick paper partition at the entrance, but he comes out every night and plays tricks. Could you please tie up the tiger?”
“….Yes, I will. Then, please give me a strong rope.”
The time has come.
“Someone, please get the tiger out of the partition.”said Ikkyu-san.
Even the great samurai could not get the tiger out of the partition. Everyone was at a loss.
“Please hurry. If you don’t get this tiger out, I won’t be able to tie the tiger up. Come on! Quickly!”
said Ikkyu-san.
“I’m beaten, it’s my defeat. I see that you are a wise boy. Now, I will give you a lot of rewards.”
“Thank you very much. “

At the age of 12, Ikkyu-san set out on a journey of ascetic practice to learn more about Buddhism and other studies.
Later, he became the chief priest of Daitokuji Temple in Kyoto and spread the teachings of Buddhism as a great monk named Ikkyu Zenji.
Ikkyu-san was a clever boy who was good at Tonchi(a wit), and he left many other interesting examples besides the episodes presented here.

18. God of Poverty and God of Fortune 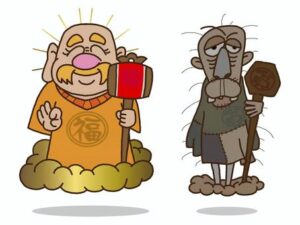 Once upon a time, there lived a very hardworking couple. They worked and worked, but their life did not get any easier.
The couple was the hardest workers in the village, but they were poor. They worked in the fields from morning till night. They wove straw shoes and baskets after supper near a Japanese Irori fire place.
“We have had enough of poverty. Why are we so poor? I want to drink alcohol and buy your clothes. I want to go to town once in a while,” the husband said.
”There’s no use in saying that. Let’s just work.” the wife said.