No.5 This site.
11. Saru Kani Gassen (The Battle of the Monkey and the Crab)
12. Kobutori Jiisan (The Old Men with a Lump)
13. Ubasuteyama (The mountainous where old people were abandoned)

11. Saru Kani Gassen (Battle of the Monkey and the Crab) 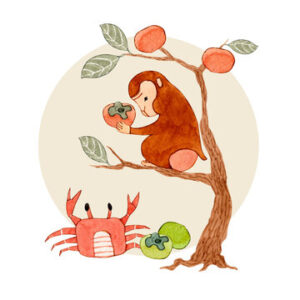 After exchanging, when the crab got home, he cast persimmon seeds in the garden and watered them every day.
He told the persimmon seeds,
“Hurry up and sprout, persimmon seeds. If you don’t, I’ll chop them off with scissors.”

The crab sang, and the persimmon seeds sprouted.
The tree bore many fruits in no time at all.
But then the monkey came again.
“Good, good, lots of tasty persimmons have grown. Wait a minute, Mr. Crab. I’ll climb up the tree and get them for you.”
The monkey climbed up the tree, took all the persimmons, and started eating them.
The crab said,
“Hey, hey, don’t eat all the persimmons, please give some to me too.”
So the monkey threw astringent persimmons as hard as he could at the crab, and the crab was seriously injured.
When the crab’s children learned of this, they rose to take revenge on their mother and asked their friends, a rice mortar, a bee, a pin, and a sweet chestnut to help them.
They hid in the house while the monkey was away and waited for his return.
After a while, the monkey came back, entered the house, and sat down in front of the fireplace. Just then, a burnt chestnut burst on his butt.
“Ah-chi-chi chi-chi, ouch!”
The monkey rushed to the water pot.
This time, the bee flew out and stung him on the shoulder.
“Ouch, ouch, ouch. I can’t stand it!”
The monkey ran to the water jar, and this time the crabs came out under the jar, climbed on his body, and grabbed his hair, skin, and ears with scissors.
“Ouch!”
The monkey ran out of the house.
This time, a big rice mortar fell on him from the roof.
“Well, monkey?  How about it, you should apologize to the crab.”
“I’m sorry, I’m sorry. I will never bully Mr. Crab again.”
The monkey cried and apologized to the crab. 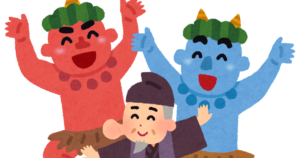 Once upon a time, there were two old men with large hump on their cheeks.

One was a kindly old man.
“There’s Grandpa with a hump.”
The children teased him, but he was always smiling.
The other one, however, was a naughty old man who was always yelling at the children.

One day, the former Grandpa went to the mountain to collect firewood.
Suddenly it started to rain, so he ran into a small hall and fell asleep.
He was awakened by a lively noise outside the hall. He looked and saw many demons dancing and drinking to the music.

”This is interesting.”
He walked out of the hall and joined the circle of demons.
The demons were delighted to see how well he danced and sang songs, and when dawn broke, the demon leader said to him,
“Hey, Grandpa, you’re really good at dancing and singing songs.
I will give you a treasure as a reward. Come back tomorrow night. Until then, I will take care of your hump.”
The demon plucked off the grandfather’s lump. The grandfather’s cheeks became smooth.
He told his wife about what had happened today when he went home,

The other old man who lived next door was listening to their conversation.
The next night, the old man hid in the hall and waited for the demons to come.
the demons appeared after a while and began to dance and sing songs.
However, the old man was so afraid of the demons that he couldn’t help them.
But he wanted to have his hump removed, so he joined the circle of demons and began to dance and sing songs.
But his dancing and singing were not very good.
The ogres became very angry.
“Stop it, stop it. You are not good at all. It’s not the same as yesterday. I’ll give you back this hump, don’t come back again.”
The ogres threw the lump at the old man which had been taken from the former old man the night before.
What do you think happened?
The hump stuck to the old man’s cheek.
The old man went home crying with two lumps on his cheek.

13. Ubasuteyama (a mountainous place where old people were abandoned) 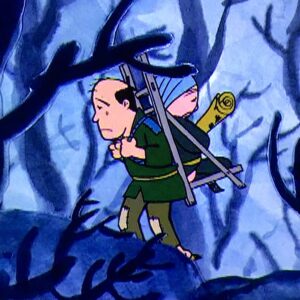 A long time ago, the Lord of a village issued a decree that all elderly people over the age of 60 must be thrown into the mountain, even if they are parents.

In this village, there was a house where a son and his elderly mother lived. At last, the mother turned 60 years old. The son cried that he did not want to abandon his mother on the mountain, but his mother told him to abandon her. In tears, the son carried his mother on his back up the mountain where the villagers abandoned their old people.

The mother, while being carried on her son’s back, made a signpost by breaking many tree branches along the way so that he would not get lost on the way back home.

The son left his mother deep in the mountain and began to walk back the way he came. The way back was easy to find because his mother had broken and discarded the tree branches.

The son wondered,
“Why did she make a signpost for me when she doesn’t know what will happen to her?

The mother thought,
“Honest to goodness, he is the child I carried and gave birth to.”
Unable to leave his mother behind, the son hurriedly turned around and ran home carrying her on his back.

After bringing her home, the son secretly built a hidden room under the floor of the house and hid her there. He spent his days pretending not to know anything about his mother.

One day, however, a messenger from a neighboring country came to the Lord with a difficult task,
“Weave a rope out of ashes, or we will invade your village.”
The Lord, annoyed, sent an announcement to the whole country, asking if there was any good wisdom to be found.
The mother told her son,
“Dip a tightly braided rope in salty water and burn it when dry.”
The son did as she told him, made an ash rope, and took it to the Lord.
The Lord was so happy, and he gave him many rewards.
However, the messenger of the neighboring country came up again with another difficult problem.
“Try to thread a seven-knotted bent bamboo.”
“Make a drum that beats without being struck.” and,
“There is a stick. Which is the root and which is the branch?”
But thanks to the wisdom of his mother, who lived under the floor, he was able to solve all these problems.
The Lord said,
“I’m at my wits’ end. Did you solve all these problems by yourself?”
“To tell the truth, it was not I who solved the problems, but my mother. You ordered the village people to throw the old man into the mountain. But I could not do such a cruel thing. I hid my mother underground. The old may not work hard anymore, but they know more than the young.”

The Lord thought for a moment.
“You are right,” he said. “I was wrong. Let’s not throw old people into the mountain anymore.”
From then on, the country became a place where the elderly were respected. The Lord knew that this wisdom that solved the problems came from his mother, who was over 60 years old. The Lord told the villagers to stop abandoning the elderly anymore.