Notes: Hagoromo is a robe worn by celestial maidens, that is said to allow them to fly freely through the air. Ama means heavenly beings. “no” means a possessive word. 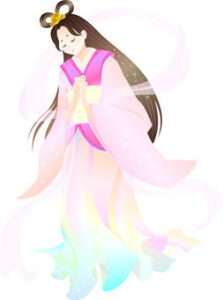 Once upon a time, there was a young man living alone.

He was not bad looking, nor did he work hard, but he could not find a wife for some reason.

Nevertheless, the man worked hard every day from morning to night and enjoyed his life even though he was alone.

One morning, the man woke up earlier than usual and went to the beach to work.

It was a beautiful day. The beach was quiet in the morning when no one was around, and the waves were calm. The morning sun shone on the seawater, and the white sand and green pine trees were so beautiful.

It was such a beautiful place…it must have looked beautiful even from the heavens.

On that day, eight heavenly maidens descended from the heavens to play and swim in the seawater on this beautiful beach.

A man gasping at the beauty of the scene looked at a nearby pine tree and found the celestial robes of the maidens.

“I will take one of them and keep it as an heirloom in my family.”

After bathing, the women wore their celestial robes and soared into the sky.

However, one nymph who could not find her celestial robe was left behind.

“What’s the matter with you? You’ll catch a cold. Now put on my robe, and let’s go to my house anyway.”

The man thought that a girl as beautiful as this could not be found anywhere in the city. The man wanted to make the girl his wife somehow.

The girl thought about it for a while, but seeing no other way out, she nodded her head and decided to go with the man.

From that moment on, the man’s daily life changed utterly. He was delighted by the delicious meals the girl cooked, went with her to the fields and mountains to pick flowers, and occasionally went into town to entertain her, taking great care of her.

So the man worked harder than ever for her.

She thought it was an unexpected turn of events. She was happy with the man’s kindness and the fun they had together. She even began to love the man who was overjoyed at every single action she did.

However, the man did not miss the girl’s face, which would suddenly cloud over at any moment, and she would sigh deeply, tears welling up in her eyes.

He knew exactly why, and the sad look on his wife’s face made him think that he had done something wrong, and for a moment he thought about returning the robe, but he still wanted to stay with her a little longer, so he kept quiet about the robe hidden in the attic.

One day, while cleaning the house, she found a box in the attic that she had never seen before. She opened the box.

To her surprise, she found her own celestial robe, which she had longed to have again…!

She took it, sat down in front of the man, and said,
“My dear, this is my celestial robe. Why did you keep it hidden? I really enjoyed myself and was happy that you cared for me so much, but now that you have hidden my celestial robe, I can no longer be with you.”

Then she stood up and softly put on her celestial robe and flew out of the open window toward the heavens.

The man quickly reached out and tried to retrieve the celestial robe. But by a fraction of a second, she had already flown out of the man’s reach.

The man stood there calling for his wife, staring at her as she became smaller and smaller as she flew toward the heavens.

Once upon a time, deep in the mountains, there lived a grandfather and a grandmother.

They were so poor that they seldom went shopping in town. They took a bath only once a month.

Grandpa worked in a small field, and Grandma did needlework at home.

One day, when Grandpa went to the mountains to gather firewood, he heard an unfamiliar sound. He peeked out from behind a tree and saw two mouses practicing sumo.

The little mouse was always thrown out of the ring by the big mouse. When he took a closer look at the little mouse, to his surprise, it was the mouse that lived in his house.

When Grandpa went home, he told Grandma what he had seen.

“Well, two mice were wrestling, weren’t they?” said the Granma.

“Grandma, the big mouse lives at the richest house in our village, and the little one lives at our house.” said the Grandpa.

When they were done, she cut the glutinous rice cake into small pieces, arranged them on a tray, and put them on the altar.

“Now, little mouse,” she said, “Eat as much rice cake as you like, and beat the big mouse.”

That night, the little mouse immediately found the rice cakes on the altar and ate them.

The next day, Grandpa went to the mountain to watch the mouse wrestling match, sumo.

In the first round, the big mouse won by “oshidashi”(pushing out).

In the second round, the small mouse won by “nageotoshi” (throwing down).

In the third round, the big mouse won by “tsuri-dashi(hanging out).

In the fourth round, the small mouse won by “oshi-dashi” (pushing out).

After wrestling many times, both mice got tired and sat down at the foot of the tree.

“How did you become so strong in just one day, little mouse? ” said the big mouse.

“I ate the rice cakes that Grandpa and Grandma made for me.”

“Can I go to your house to eat it? “The big mouse said.

“The Grandpa and Grandma are very poor, if you bring money, you can eat it.”

When the old man came home, his wife immediately asked him,

“How was their sumo game today?”

He said, “It was a good game. They fought evenly.”

“I’m glad the rice cakes I made were useful.” said the Grandma.

“By the way, the big mouse wants to eat your rice cakes. So please make some more today for him.” said the Grandpa.

“Then we won’t be able to eat mochi, rice cakes, at New Year’s, but that’s okay?”

That night, a big mouse came to Grandpa and Grandma’s house carrying a big sack.

“Here are the rice cakes Grandpa and Grandma made for you, eat them. The little mouse said.

The big and little mice ate it until they were full.

The grandmother also made the two mice a red sumo wrestler’s belt.

In the morning, Grandpa and Grandma found a bag full of money on the altar.

They had a happy New Year and were able to go shopping in town and take a bath every day. 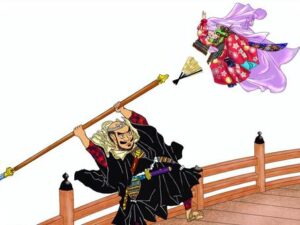 Once upon a time, a mother and two small children and a baby in the mother’s arms were hurrying through a heavy snowstorm in the mountains on the outskirts of Kyoto, western Japan.

The mother hurrying through the heavy snowstorm, Yoshitomo’s wife, Tokiwa, with her three children, Imawaka, Otsuwaka, and Ushiwaka, who were still weak, tried to escape out of the reach of the Taira clan.

But unfortunately, they were discovered by Taira warriors at last and brought before Taira no Kiyomori, the leader of the clan.

When Kiyomori learned that the children were sons of Minamoto no Yoshitomo, he ordered his soldiers to kill them all immediately.

However, the mother, Tokiwa, pleaded with Kiyomori,

“I don’t need my life. Instead, please save the lives of these children.”

Kiyomori was so moved by Tokiwai’s desperate request to save her children’s lives.

In return, he made her, Tokiwa, promise that Imawaka, who was seven years old, and Otowaka, who was five, would be trained to become a monk at a  temple immediately, and the youngest Ushiwaka, too, when he turned seven.

The years passed quickly, and the time came when Tokiwa and Ushiwaka had to fulfill their agreement with Kiyomori to be trained at a temple.

“Ushiwaka, you are already seven years old. You must join a hard training at a temple and become a good monk.”, said the mother.

Ushiwaka had to say goodbye to his kind mother.

“Whenever you are lonely, you must play this yokobue(a short Japanese flute made of bamboo), which your father treasured so much.”

Ushiwakamaru was given to a temple called Kuramadera, which was located in the middle of a dense grove of trees in the mountains of Kurama, northern Kyoto, where he began a hard life of asceticism.

One day, while Ushiwakamaru was studying alone, he heard a voice calling him from somewhere.

(*)Wakasama means a young master (a respectful way of referring to the son of a high-ranking person).

“Who is calling for me?”

Ushiwakamaru looked around and found a strange monk sitting there.

“I am pleased to meet you, Wakasama. I am Masachika Kamata, a traveling monk. Wakasama, please listen carefully. You are the son of Minamoto no Yoshitomo, the general of the Minamoto clan, who was destroyed by the Taira clan!”

You must defeat your father’s enemies, and bring down the tyrannical Heike clan. And you must restore the Minamoto clan!”

Ushiwakamaru, hearing all this for the first time, ran into the mountains and wept alone.

It was too heavy a fate for young Ushiwakamaru to bear.

SomeTengus* who lived in the mountains took pity on Ushiwakamaru and trained him how to use a sword. 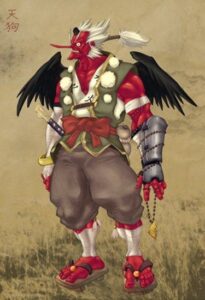 *A Tengu is an imaginary goblin in Japan living deep in the mountains. He has supernatural powers and is human in form. He has a red face, a long nose, and wings on his back, and flies as he pleases with a feather fan in his hand.

After many days of training, Ushiwakamaru suddenly could stop Tengu’s quick sword in his practice, which was cutting swiftly, and struck Tengu hard with the sword in return.

Ushiwakamaru’s skill with the sword had finally gotten the better of Tengu.

Since that day, no other Tengu could match Ushiwakamaru’s skill.

One day, A boss of Tengu said to Ushiwakamaru,

“Wakasama, we have nothing more to teach you. May you be a great samurai from now on.

These Tengus must have been vassals of Yoshitomo who established the Minamoto clan.

Ushiwakamaru, who had learned swordsmanship at Kuramayama, quietly disappeared from Kuramadera Temple in his fifteenth year.

At that time, there was a rumor in Kyoto that a mysterious big monk named Benkei appeared every night, stealing swords from passersby and making a prayer to collect 1,000 of them.

Tonight was the day of the 1,000th sword to be collected, and here was the Gojo Ohashi Bridge in Kyoto.

Benkei heard the sound of a Japanese yokobue playing from nowhere and looked around.

But as soon as he saw a Japanese sword at his waist. he said,

He raised his naginata* high and stood in front of Ushiwakamaru.

*Naginata is a long-handled pole sword.

Ushiwakamaru, however, slid past Benkei.

Ushiwakamaru jumped up and threw his fan to Benkei.

The fan hit Benkei in the forehead, causing him to fall over.