At the World Cup Soccer Tournament in Qatar (November 2022), Japan won a 2-1  come-from-behind victory over the powerful Germans. Not only the match but also the post-match, trash pickup by Japanese supporters won praise from overseas.

The media in many countries have either praised or been surprised by the Japanese cleaning up the litter in the bleachers after the match.

Yes, It is quite natural(a-ta-ri-ma-e in Japanese) for us to clean up after using tools, venues, or spectator seats for an event so that the next person can use them comfortably.

We have been taught to do so since we were small children. This is called civic virtue(kou-toku-shin in Japanese).

No.1 This site.
1. Tsuru no Ongaeshi (The grateful crane)
2. Kaguyahime(The bamboo princess)

1. Tsuru no Ongaeshi (The repayment of the crane) 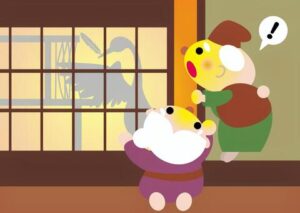 Once upon a time, there lived an old man and an old woman.
One cold and snowy day, the old man was on his way back from selling firewood for fuel in town when he saw something moving in the snow.
What is it?
He found a crane caught in a trap. The more it moved, the tighter the trap became on the crane, and he felt very sorry for it.
“Well, well, well, poor thing. Be careful from now on.”
He released the crane from the trap, and the crane flew away toward the mountains.
When he returned home and told his wife the story.
“I saved the crane that was trapped not long ago. I did a good thing today.”
As he said this, there was a knocking at the front door.
“Who is it?”
When his wife opened the door, she found a beautiful young woman standing there.
The young woman said,
“I am lost in the snow. Could you please let me stay here for tonight?”
The old woman said,
“It is especially cold tonight. Come on in.”
The daughter was delighted and decided to stay there.
She stayed at the couple’s house from that day on.
One day, the daughter said to the grandfather,
“Please let me waeve cloth. However, while I am working, please do not look into my room. Never, never, never look in my room.”
“We understand. We will never peek. Please weave a fine cloth.”
Ton-ton-karari-ton-karari, Ton-ton-karari-ton-karari.
(These are imitative sounds of hand-made weaving machine when weaving cloth.)
She would lock herself in her room and start to work all day long and not come out even at night.
She continued to do it the next day and the next. The grandpa and grandma listened to the sound of the weaving machine.
On the third night, the daughter came out with a roll of cloth when the noise stopped. It was a beautiful fabric, unlike anything the couple had ever seen before.
“This is called a crane weave,” she said.
“Please take it to the town and sell it. I am sure you will get a lot of money for it.”
The next day, the grandfather went to the town.
“Don’t you want crane weaving? Do you want some crane fabrics?”
The fabric was sold for a very high price. He went home happy.
The next day, the daughter began weaving again.
Ton-ton-karari-ton-karari, Ton-ton-karari-ton-karari.
The grandmother said to her husband when after three days had passed,
“Why did she make such beautiful cloth? How is it possible to weave such beautiful cloth? Let’s take a peek.”
They looked into the room forgetting the daughter’s advice not to look, .
And what a surprise! A crane was pulling out her wings and weaving cloth with them.
“Grandpa, a crane is weaving.”
She whispered to him.
The daughter came out of her room with a roll of fabric at that night.
She said,
“Grandfather and grandmother, I will never forget your kindness. I am the crane that was free from a trap by the grandfather. I came here to return the favor, but now that you have seen me, I can no longer stay here. Thank you for your kindness.
She spread out her hands and became a crane, soaring into the sky, circling over their house, and flying off toward the mountains. 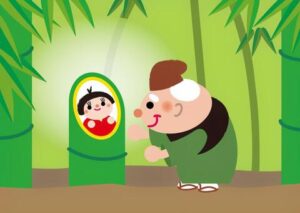 Once upon a time, there lived an old couple who cut bamboo to make baskets and colanders to earn their living.
One day, when they went to the bamboo grove, as usual, they found a shiny bamboo.
“I wondered what was wrong with that bamboo. It is shining so brightly.”
When he cut it open, he found a baby girl inside.
Since they had no children, they named her “Kaguyahime” (bright queen))and took good care of her.
After that, every time the grandfather went to cut bamboo, he found money in the bamboo and became rich.
The baby grew up to be a very beautiful daughter.
Many young men came from all over the nation to ask for her hand in marriage, but Kaguyahime was not interested.
She was always lost in thought, looking up at the sky.
The grandfather could not ignore the young man’s proposal of marriage, so he decided to give Kaguyahime to the one who brought a mysterious treasure.
Several young men brought him treasures, but Kaguyahime immediately recognized them as fakes.
Whenever Kaguyahime looked at the moon, she would make a sad face.
The grandfather asked Kaguyahime,
“Why do you look so sad?”
“The truth is that I am from the moon. Soon I have to return to the moon. I am sad to say goodbye to my kind you two.”
“That’s absurd,” said the grandfather.
He was puzzled.
Tomorrow is the day. He enlisted many warriors to protect Kaguyahime.
He did not want to let her go to the moon.
That night, when the moon appeared over the mountain, a golden light shone.
The warriors shot arrows at the light, but when they hit the light, they lost their strength and fell asleep.
An angel appeared from the light and descended on the house.
”I thank you, grandpa and grandma, for taking care of me for so long,”
she said.
“I have to go back to the moon now. Please take good care of yourself. Farewell.”
Kaguyahime said goodbye to her grandfather and grandmother.Taking Kaguyahime’s hand, the angel soared into the sky with Kaguyahime.